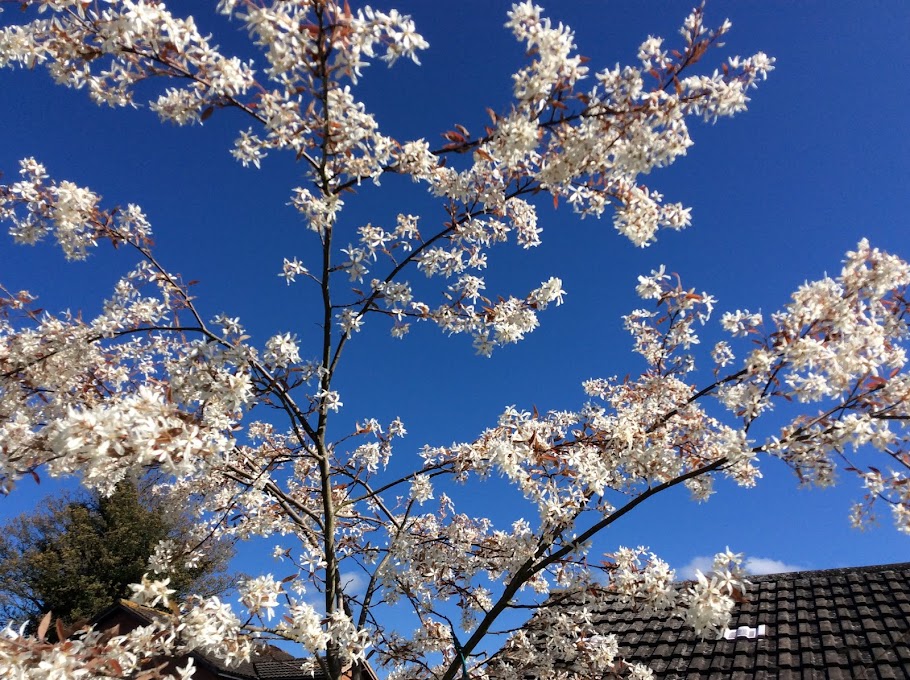 Oh wow what a busy week I've had....and it's not stopped yet!!  Today is my darling hubby's birthday and we have Theo all day today while his mummy is working....it's the first time in months because of the lockdown and we have really missed him.

I was really honoured to be asked by Doug to make some very special Memory bears from Shaz's stunning black wedding dress and long red velvet cape.  It was a really emotional task but I have done my best.  Whilst unpicking her cape I had a 'moment'....from somewhere  [and I really don't know where] a cloud of confetti went up.....we gathered it up and I made a little net bag for it so I could put it in the extra special bear I made for Doug.  I planned to make little rosettes to go on the front of each bear but then Jo said she would like to do something towards making the bears so she called round and picked up the fabric [the gorgeous red satin lining from the cape] and some of the beads to make them with.  I set to and made the 11 Memory bears he was wanting and then sewed the gorgeous rosettes on the front of each one.....I'm rather pleased with the results and so was Doug [and he was very happy for me to share their photo with you all].  :-) 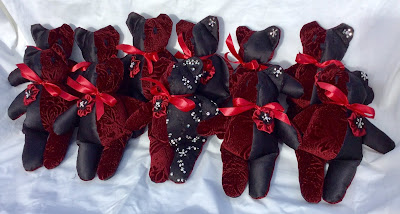 I was really touched when Doug gave me this card... 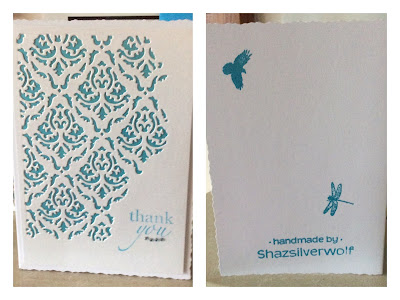 He said it was the last card Shaz had made and what made it even more special is because she hadn't put her stamps on the back, before he gave it to me he got Shaz's stamps out and finished the card off on the back....this was the first stamping he'd done :-)
Lets hope this is the first of many eh?
Since then it's been non stop here.... 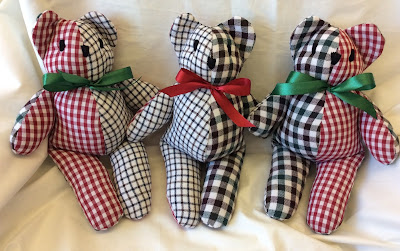 These three were made in memory of a special gentleman using his 3 favourite shirts. 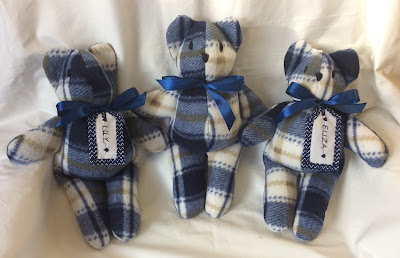 These three were made using a lumberjack style fluffy shirt/jacket and have made 3 really lovely bears. 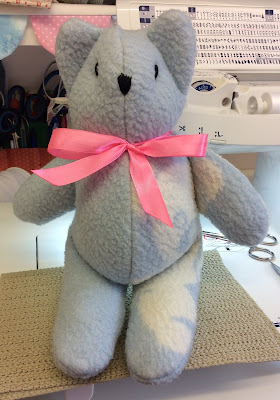 And this one was made using the special baby blanket that belonged to a man when he was a baby to celebrate the fact he is now becoming a dad.

Each of the bears I make come with their own stories and I really love making each one.

I have a long list of jobs pending everything from 8 Memory cushions for one customer and more wanted by another customer and another 6 Memory bears for several other customers.  I have had weeks of making my Luna Lapin characters because I had no work and now suddenly everyone wants me this week.  I have also made a batch of face masks ready for Phoebe to go back to school soon....she will have to wear them all day every day so will need several to keep her going.

If you leave me a little comment to say you've called by I will do my best to pop over to yours to see what you've been up to this week.

Take care and stay safe and well my friends.

I've just been reading Doug's post about how he practised the stamping on the back of the card. The bears are adorable. Happy WoyWW Helen #5

So glad you added the card the card Annie, i did not think to take a picture of it xx
All but 3 of your beautiful bears have their forever home now, mine has had followed me between rooms a couple of times, pretty sure it is stalking me. #6

Now I can see why Lynn was so tearful this morning! Goodness, this does give you all the feels doesn't it. Love the confetti "message" - Shaz saying SURPRISE! They look amazing and I adore the beading on them too - what a clever pair you are. Good luck with the birthday and the grandson and the busy week! Stay safe and keep smiling, Lisa-Jane #7

I’d have had a moment too Annie, the confetti and your treatment of it made me gulp. ❤️ So glad that things seem to be busying up again, I suspect that the lockdown will give rise to lots of orders and ideas to make things from other things,,,,we’ve all done a lot of clearing out!

Morning Annie. Oh my - what a week you have had. Finding the confetti must, indeed, have been quite a moment! So glad you managed to gather it and fit it in! Well done to sis, too. The decoration on those bears is so lovely.
And still more bears... and still more to make! Never a dull moment in your house.
Happy birthday to hubby - have a great day together, and enjoy having Theo with you to celebrate.
Take care. God bless.
Margaret #4

A lovely post Annie - just think of the emotion all those little bears will hold. You are a gem! xx Jo

Brought a lump to my throat and a tear to my eye when I say those Shaz bears, no words can describe how lovely they are Annie and the confetti well. No more tears today for me.. The Thank you card was just made to belong to you.
Happy WoywW Hugs Tracey #14
P.S Happy Birthday to Hubby & enjoy your Theo day x

Annie, your bear stories this week have really brought a lump to my throat. What a beautiful thing to do. I love that Doug’s bear is following him round. Thanks for sharing the card as well
Stay safe and happy WOYWW
Hugs
Lynnecrafts 11

Oh my, that's a lot of bears - what a wonderful idea those little rosettes with Jo's contribution. They're so precocious and I'm glad Shaz's very last Thank You card found its way to you from Doug - Take care Annie xx zsuzsa #22

How lovely that Twiglet was able to add something to the bears, you both did a fantastic job for our lovely friend. The other bears are great too, the baby blanket one is so sweet. You’ll be seeing bears and stuffing in your sleep before long :-)
Funnily enough I was asked to make some more masks yesterday as well after quite a gap, hope Phoebe is ok in school, I think it’s important to get them back to some sort of normality.
Happy Birthday to that gorgeous fella of yours! Hope you have a cracking day and I loved the pic of the crocuseseses at the top!
Hugs LLJ 8 xxx

SUch beautiful memory bears Annie - and so cool that Jo contributed to their making too. Love the card DOug gave you and so touched that he stamped on the back himself. Stay safe and happy WOYWW. Sarah #3

All special bears but the one you made for Doug with the confetti inside made me shed a tear. Good luck to Phoebe and Happy Birthday to your lovely husband. X

Those bears for Doug are simply gorgeous and how nice that Jo added to them as well. The card is really precious too (and I loved reading Doug's story about it). Sorry I'm missing in action again this week - we have building work at ours and every evening I am having to move things round the house to make way for the next thing! I hope to be back next week. Happy WOYWW. Take care and stay safe. Caro xx

Annie, your post is beyond special!! As I was reading it and saw the picture of Shaz's dress made to live on for others, my heart just swelled! I would have been a mess trying to make that happen! They are absolutely gorgeous and as you said, I know Doug was so, so blessed by them! What an honor for you and something you will always remember. And the card!!! What a special momentum for you to have of Shaz and Doug for years to come! Sometimes projects come in floods don't they and it looks like you are flooded! LOL All are so cute and as you said knowing that you are a piece of someone's story is so honoring as well! Be blessed, stay and healthy! Felicia #26

Hi Annie, you've made a brilliant job of the bears for Doug and his family and I'm sure they will all love these very much. Looks like you've had a very busy week all round. Have a very creative week and a happy woyww, Angela x19x

Crafts in the Command Center said...

Beautiful bears and so special. I love the Thank You card and reading the story from Doug himself. So special! Have a wonderful week. Dorlene #30

I just came from Doug's post to you and seeing the continuation (in a sense) of his story was so amazing! You did a fabulous job on the bears and seeing the card he was talking about made me kinda sad but then happy. Does that make sense?
Your other bears are beautiful. How special they are.
Have a great week.
Carol N #24

You must be finding it hard to bear up with all those Memory ones you have been making. Sorry Annie, could not resist that one. Boy what a lot of Memory Bears you have done this last week.
Hugs, Neet 12 xx

Aww Annie, what a lovely job you have done with the memory bears for Shaz. I can't even begin to imagine how emotional it must have been for you. I know you make a lot of memory bears, and you get to know the stories behind them, but this was Shaz and Doug - which makes it much more personal. And to find the confetti - wow that would have been more than just a moment for me! Bug hugs, Heather xx #25

My name is Cindy said...

You have been busy! and what a great job you did with those bears for Doug, finding that confetti was a bonus. Don't work too hard! Have a good week, stay safe, stay well, love n hugs Cindy xx#18

What a privilege and a wonderful way of making a special tribute to Shaz, Annie. I can understand that this particular project must have been an emotional one for you. The bears are gorgeous - I always loved Shaz's completely alternative wedding outfit which is now immortalised in a very different format. The whole idea of memory bears is so, so special... I can't begin to guess how many lives you have enriched, and how many sad hearts you have comforted, with all your efforts in making these unique and exquisite bears, and so beautifully finished, too. It's just amazing.

Doug's finishing touches to Shaz's final card was another very emotional thing. I think he did a great job with his first attempt at stamping, and Shaz would be proud of him!