Our holiday in Scotland

As most of you will have noticed I was missing in action last week because we had headed north in our motorhome.  We intended catching up with family and friends on our journey so you may recognise a few familiar faces along our travels.

We left Shropshire on Sunday 8th and headed to our first stop on Haltwhistle Campsite in Northumberland. 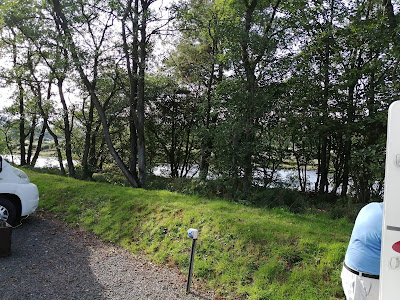 The campsite was by the side of the river and this is what we looked out over....beautiful. 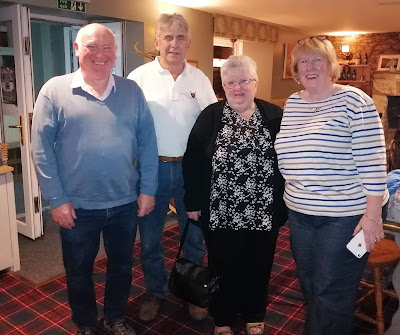 The purpose of this stop over was to meet up with my second cousin Sally and her husband Graeme who we met up last at Michelle's christening 35 years ago.  We've kept in touch since then at Christmas and on Facebook of late but not seen them since then so they had changed a little....in fact I guess we all had :-)
It was really lovely to see them again and we felt as if we had lots in common....not only our walking sticks eh Sally? On the Monday we travelled on further north to Calzean Castle campsite looking out over the sea....as you can see Biscuit bear loved the view as much as us and was excited to see who was already on the site waiting for us..... 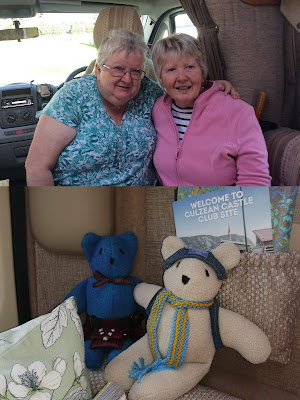 Catriona and her hubby had stayed over there on the Sunday night and had the kettle on ready and waiting for our arrival.  It was so lovely to catch up and as you can see Biscuit bear was just as excited to catch up with his friend Harris bear.

We spent Monday evening in our motorhome chatting and catching up with them both and on the Tuesday morning they left fairly early to continue their travels further south....we relaxed and waited for the next excitement..... 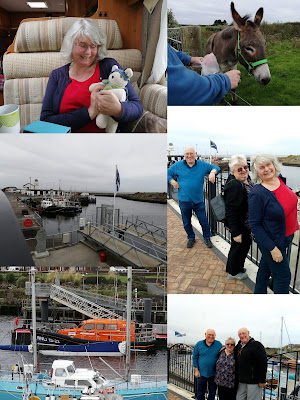 Elizabeth and her hubby drove over to us and picked us up to take us out for the rest of the day on the Tuesday.  We went down to Ballantrae where we met their friend Alfie the donkey and treated him to some carrots then we called in at Girvan on the drive back where we posed for a few photos and I snapped the local RNLI boat especially for Jan :-)

The Tuesday night was very windy so we were rocked to sleep but thankfully we survived and there was no damage the next morning. 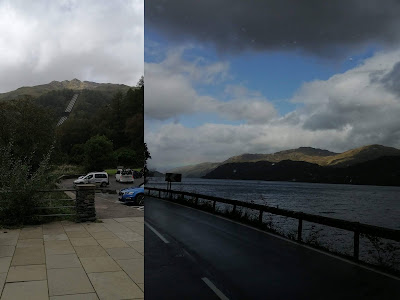 On the Wednesday we travelled further north through the hills and passed some really stunning scenery...as you can see there were some black clouds above us but we headed towards the blue sky :-)

We stopped for a toilet and coffee stop by the side of one of the Lochs and also saw a hydroelectric powerstation en route to our next stop near Oban.....this was a small campsite inside what was an old walled garden. 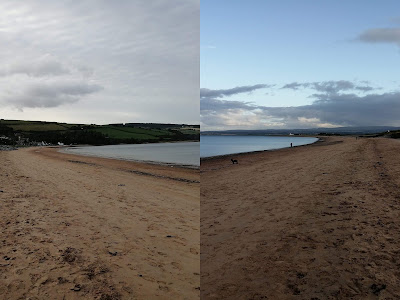 Our next stop was on the Rosemarkie campsite looking out over the sea....a lovely site and we enjoyed a walk on this beautiful sandy beach.  There had been sightings from here of seals and dolphins in the bay but alas we didn't see any while we were there. 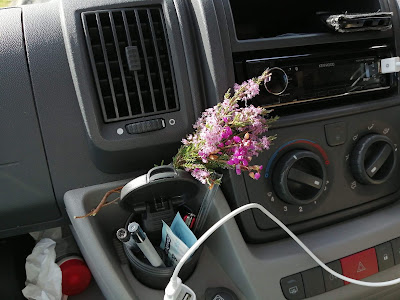 The following morning we travelled south to our final site to spend our last two nights at Beadnell Bay site in Northumberland.
En route we stopped on a layby on the A9 for a coffee and my darling hubby picked me a bunch of heather....it's now tied with ribbon and is hanging in my sewing room :-) 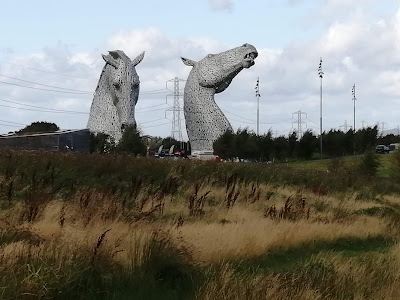 We called by to see the Kelpies but refused to pay the 5 pounds they were asking just to park the motor home so I snapped a quick photo as we passed.....stunning and much bigger than you think. 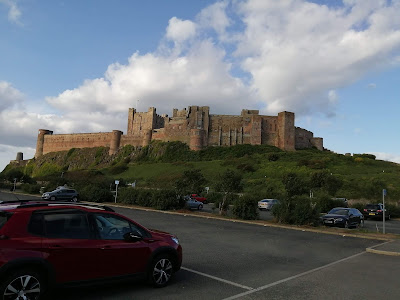 Before we reached our next site we passed Bamburgh castle....really stunning building so just had to snap a pic. 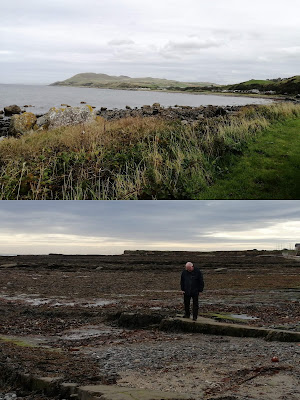 The campsite at Beadnell Bay was much bigger than all the rest and for the 150 pitches it only had one toilet block at the opposite end to the pitch we were given so it was too far to walk to use...thankfully we have our own facilities in the van but I did feel for the ones in smaller vans and tents around us.

Over the road from the campsite there was a rocky beach [just the sort I use to love as a child for hunting in the rock pools] so of course we had to have a little walk over there on the Friday evening. 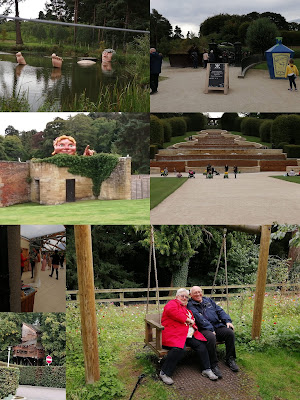 On our last day we drove to Alnwick and enjoyed a walk around the grounds [much further than normal for me so have been rather stiff since!]..It was really lovely there and we even saw a Japanese couple getting married there in one of the rooms.

The swing seats were really lovely there.....there were lots of them up through the bank of flowering cherry trees....I bet they were even better when in full bloom. 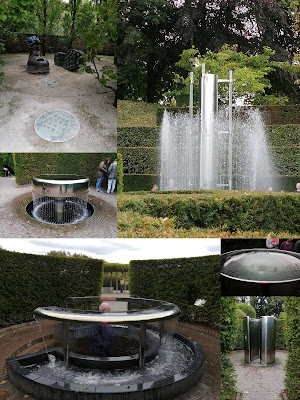 There were many water features through one area of the garden so I snapped several of them as we were passing through....even one where Dod could go down some steps and stand in the middle of....feel free to zoom in to spot him :-) 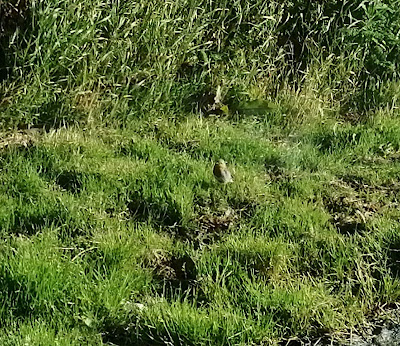 Every time we stopped [even for coffee stops on laybys] we spotted a little robin.  I know there are lots of them around at the mo but it did feel like they were watching over us and keeping us safe during our travels so thank you to the little robins....we had a wonderful week and are now safe back at home.
Posted by Annie at 16:41

what a fabulous time you've had! I've always wanted to visit Alnwick, from what I've seen it is a wonderful place. Glad you survived the weather and lack of facilities!!

Brilliant post, Annie. What a trip that was and it was particularly lovely that we got to see you again. We had a lovely day together. Alnwick looks fabulous - so impressed with the water feature Dod went into. Hope you get over all that walking soon. Hugs to you both from us. Ellie xx

Wow- you packed a lot into your stay. Thanks tor sharing your trip. X

What incredible photos. Loved that you shared your trip and how many people you were able to meet up with during this vacation. I'm sure it will be just one of many in the future, but I certainly enjoyed seeing all the photos. Those horses were UNBELIEVABLE, too.

That was the trip that was! Fantastic! I'm so glad you had a good time andmet up with so many people.
Those Kelpies are awesome!

What a lovely trip you had - and I recognised Catriona and Elizabeth!