Last Saturday I took M to look for her wedding dress ready for their wedding next July and after trying on very many dresses and lots of ooohing and awwwwing she found THE one.  We could tell it was THE one because it fit to perfection, looked amazing and I had to find a tissue....think I had something in my eye :-)  The dress was bagged up for us and we brought it home.  Since then it has had to be tried on several times already and if B doesn't get to see it before the big day it will be a miracle because M is just the worst at keeping secrets...plus of course she is so excited about it all.  :-)

I'm sure by now you will all have picked up that she has a wicked sense of humour and while she was here on Wednesday I had got my Wedding dress and veil out to show her.  She was amazed that the train on the dress was so long and the veil was even longer.  30 years ago it was all long sleeves and high necks and this caused her much hilarity.....and yes I actually made it too. 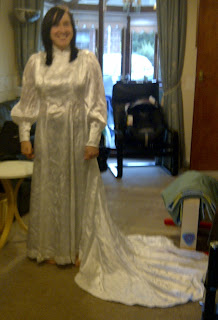 Of course she just had to try it on and get me to take a picture of her wearing it [yes I really was a size 12 back then but obviously not as tall as M cos I wore it with high heels! ]......but her fun didn't end there! She sent her picture to B pretending that this was THE dress and she had sent it to him in error....and waited for his reply.  Bless him he had opened his text message and shut it quickly so as not to see it in detail!  I have to admit M was not the only one giggling but was pleased that she did own up....as she put it.... 'just in case it was enough to put him off turning up on the day'!!!!

I hope this gives you a smile on this rather gloomy Friday morning and you all have a great weekend.
Hugs,
Annie x
Posted by Annie at 07:39

Your picture and post made me smile. Remember that 20 + years ago when my children were pre - teens I found my short wedding dress and was persuaded to try it on . Two boys stood there and asked what else I wore and were quite disgusted that I didn't wear trousers with my very short dress. Had to esplain that in those days ('69) it was quite fashionable to wear even shorter dresses with out trousers. My wedding dress was 'long' for the time. LOL
Have a good weekend.
x Tricia

Aw, you made me smile. think we need a follow up picture of you on your wedding day, please!

Aww Annie that has made me giggle this morning! Bless M thats funny. Joey x

This did give me a smile, have a wonderful weekend too. xx

Sooo funny - poor B, M has a lot to answer for! Clever you making your wedding dress - and I bet it was stunning on the big day! Loft ladder coming down, I'm going up there for a rootle round :)) Di xx

yES i AM SMILING LIKE A LOONY ! wHAT FUN. i'M SO GLAD THE DREAM DRESS WAS FOUND & SUCH FUN HAD DRESSING UP IN YOURS. i'M SURE THE GROOM WILL THINK HIS BRIDE BEAUTIFUL WHATEVER SHE WEARS !

I'm smiling too - how fun - and how wicked..love that!

That is an amazing dress! Funny how styles change so much! Hope you found something much more to her style though! :) x

How funny, glad 'the' dress has been found. I have my Mum's wartime wedding dress in the loft, hoping one day it will fit our grandddaughter, she will need to stay slim though!
Carol xx

Your daughter has a good sense of humour!
We will also have a wedding in 2012 and my daughter has found 'the' dress and strangely, I had something in my eye too, at the moment she stood before me with her choice.
I wore my mother's wedding gown 38 years ago. Alas, girls keep getting taller and I doubt that there will be anyone in the next generation who will be able to wear it.

What a lovely funny story and I bet the fun brought back lots of memories.
M has done well getting in shape again and it really still looks a lovely dress even if it is out of date for today's styles.
Jo x