Preparing for a big day....

Yesterday I went with my daughter M and her two bridesmaids to look at dresses for M's Wedding.  We had a appointments at two Wedding dress shops, one in the morning and the other after lunch and a girly day of fun and laughter was planned. 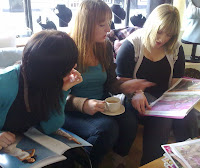 The first shop was the smallest and very organised but seemed to be reluctant to let M actually try on any dresses she had chosen.  The staff spent their time bringing their choice of dresses to the rail, dressing and undressing M in a conveyor belt fashion with about 6 dresses and tidying any away that the girls had chosen before they had chance to try them on.  Then when the girls asked to try on some bridesmaid's dress we were told our time had run out and we would have to go back another day!.....I don't think so!

We had lunch in Shrewsbury with time to chat over the dresses M had tried on and then headed out for our second venue.  I have a feeling neither of these will be the chosen one.
We were very early for our appointment but were still made very welcome and encouraged to hunt out any dresses they wanted to try on.  They had a room full of bridesmaid's dresses and mother of the bride outfits and an other enormous room full of the most gorgeous wedding dresses you could ever imagine.  We felt like we had gone to heaven  :-) 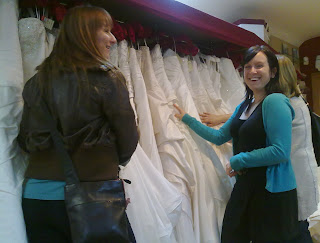 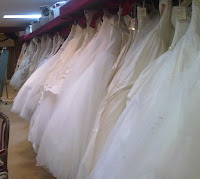 Several hours later we left feeling totally wowed.  M had tried on lots of really gorgeous dresses and fell in love with a lot of them but we don't think she has found THE dress just yet.  I have a feeling we may be making many visits yet [.....mostly because it was such great fun] before we find THE ONE.  :-)
Posted by Annie at 10:33

WoW what a lot of frothy silkiness!! Looks like you had fun testing them out!! I guess she will know THE one when she sees it!

What a super fun day we all had!! I love girly days trying on beautiful dresses!! I think we should try on a brides dress next time!!!I don't like either of those dresses........bluuurrrgh!! The two we like are remaining secret just in case they are THE ONES! hehe! Thanks for a great day mum!! Lets do the the same next weekend!! hehe xxxxx

Looks like you had a great day. It needs stamina to try on dresses all day so well done M!

What fun - looks like you had a great time.
Linbyx

oh what a glorious array of froth! It sounds like you had a wonderful day - and I'm sure even if the "right" dress hasn't put in it's appearance, your daughter will be clearer in her mind about what works for her when she goes on the next dress hunt

What a fab day you all had Annie; it's such a fun time!

I think every bride these days struggles to find 'the one' mainly because there is so much choice! Just think, in our day we never such a selection at all! Its so much easy the fewer there are! So M really needs to be sure and try on every one just incase!

It takes stamina and lunch for sure. How fun! My experience wasn't the same, but the dress that became 'the one' was obvious from the minte I tried it!