Another week has passed and it has certainly become Autumn here now.  The clocks went back last weekend and not only is it dark in the mornings when we have to get up but by 5pm when we finish work it's getting pretty dark too,  Roll on Spring I say  :-)

We had some really great posts linked up here last week and today I'm featuring my big sister's impersonation of Andy Pandy....did you think the same too?  For those who don't know who I'm talking about here's a reminder...

She just needed a frill round her neck :-)

I know the pic is in black and white but it was back then wasn't it?.....yes I'm really that old to remember lol  Thanks Jo.

I am also giving a mention to Debs pic or her reindeer massacre today cos she snook it in as a late comer yesterday and it really made me laugh.  Thanks Debs.

My pic for this week was one of Amy's three this week.  Like most houses they have large flat screened televisions in the house and all the modern techy equipment that all three of the children use with no hesitation of course but this is a pic of three little children glued to an old box type television their mummy used to have as a teenager simply because it has a video player attached.  We found some old Disney videos while sorting out here and watching one has proved very successful....for a little while at least  :-) 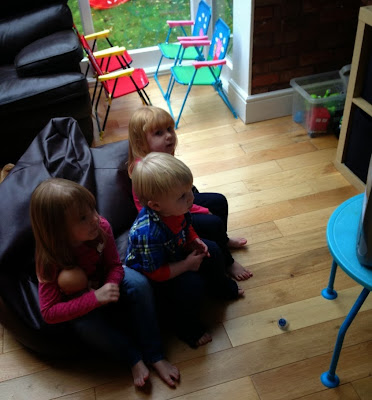 It made me chuckle so hope it raised a smile for you too.

Thanks so much for dropping by this week.  Please do your best to share your happy moments with us and link them up below.

It did indeed raise a smile. Disney videaos where a staple here....I think Jungle Book was a the favourite, although I can probably sing every song from every story...although there are much newer stories and characters now, and since Miss D stopped being involved, they just pass us by!

The last picture is lovely! Certainly made me smile. Has also given me an idea too, as we have a old televsion with video machine attached too, next time the grandchildren come to play.........
Julie xxxxxxxxx

That's the magic of Disney I'd say
:-)
Janet

So much for modern technology!! I am sure that gave just as much pleasure as all the new stuff. x Jo

I hated Andy Pandy, wanted to slap him...The Woodtops were my favourite and Trumpton/Camberwick Green!!
Lovely to see that Disney still can sweep you away into another place :-)
Hugs, LLJ xx

Gotta love Disney! I know I do, specially when I am poorly!
I can tell you a story about Disney videos. A member of the car club Hubby belonged to came to visit one day for a spare wheel nut or such like and I made him a coffee etc. He then asked me where the children were? What children we don't have any? says I. Well the book case is full of Disney videos I just presumed..
Haa Haa! Got me to a tee!
Hugs
xx

I've been to both Disneyland and Disney World, and they are as magical as the videos. Love this photo of the kiddos.

I had every intention of joining in today, but didn't realize it was already Friday when I started this month long art every day. However, I'm already looking around for a smile for next Friday!!

To think we recently threw out all our old videos, many of which were Disney films we had from when our grandchildren had sleepovers here ... we could have sent them down to you had we known you had an antique telly :) Lovely photo of the wee ones being entertained. Elizabeth xx

PS: totally forgot what day it was ... even had to check with the EM as I thought it was Saturday!!!

Andy Pandy? How old do you think I am!!! After a day in the garden I feel about eighty. Sitting at the desk is much easier.
Sorry about Spring, but it's our turn. Hope you enjoy the Spring garden pics vicariously and have a good hibernation.
Great photo of the kids - history presents some interest for a while as you say.
Hugs,
Ros.

aw, lovely picture, I remember Andy Pandy! I learnt the days of the week that way because I knew what day each program was on... I liked Bill and Ben. Couldn't join in as I was out walking dogs! By the time I was home I fell asleep in the chair!! (Just like today) I think I may have started this dog walking business at the wrong end of my summer years! I'm hoping to share last weeks pic, this week.
(Lyn)